Hover over the slideshow for more info 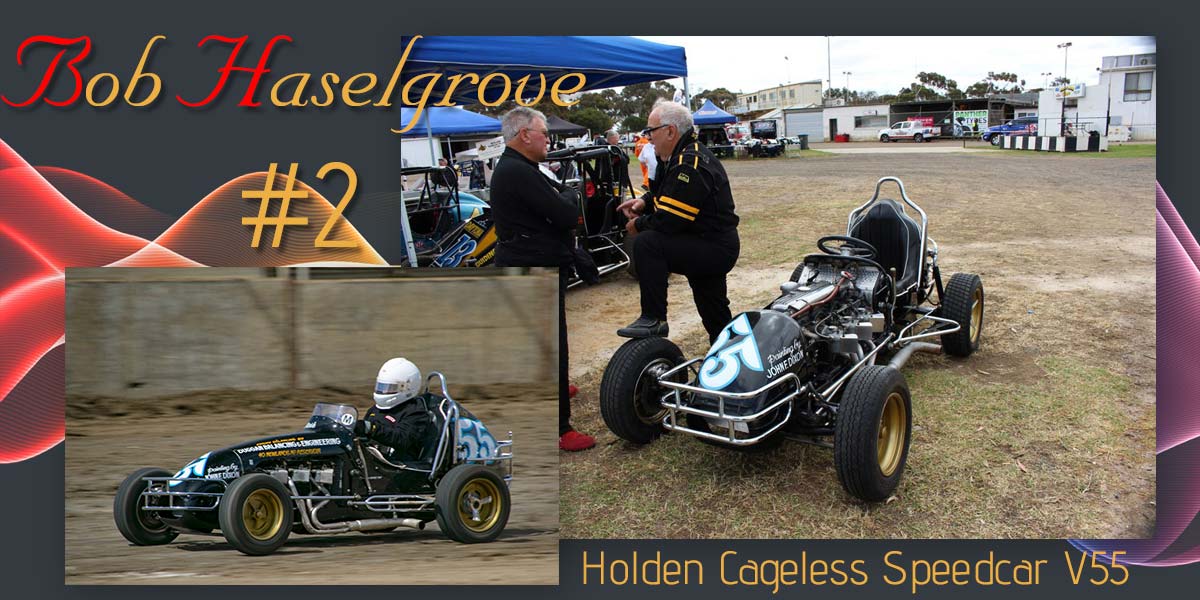 MAJOR ACHIEVEMENTS:11th of January, 1964: 3rd place in the Alf Beasley Memorial at tracey's Speedway.
Len Fleming was the owner, and Bill Humphries was driving the car.14th of March, 1964: 1st in the 25 lap Australian Derby at Tracey's
Speedway.March 1964: won the 50 lap Golden Fleece Grand Prix at Tracey's Speedway.6th April 1968: won the 30 lap Victorian GP at Redline,
this time with Des Nash driving.1969/70: Won the Club Point Score and the Redline Track Championship, and qualified for the
National Championship at the Sydney Showgroinds with Des Nash Driving.1969/70 season: Won the Victorian Title at Redline Speedway,
with Des Nash driving. 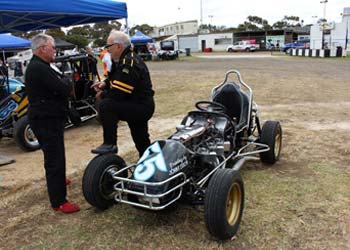 The No. V55 Non Caged Speed Car is now lovingly demonstrated by Robert Haselgrove. Robert takes Great Pride in his Car, and it is always immaculately turned out.
Chassis: Kurtis Copy, Torsion bars front and rear.Original Builder/Owner: Len Fleming.
History: This speed car was restored to as raced 69-70 condition by Wayne Pearce. The car raced at Tracey's Speedway, Redline and Brooklyn in Victoria, Rpwely Park in South Australia, the Ekka in Brisbane Qld, and the Sydney Showgrounds in New South Wales.

MAJOR ACHIEVEMENTS:
11th of January, 1964: 3rd place in the Alf Beasley Memorial at tracey's Speedway. Len Fleming was the owner, and Bill Humphries was driving the car.
14th of March, 1964: 1st in the 25 lap Australian Derby at Tracey's Speedway.
March 1964: won the 50 lap Golden Fleece Grand Prix at Tracey's Speedway.
6th April 1968: won the 30 lap Victorian GP at Redline, this time with Des Nash driving.
1969/70: Won the Club Point Score and the Redline Track Championship, and qualified for the National Championship at the Sydney Showgroinds with Des Nash Driving. Won the Victorian Title at Redline Speedway, with Des Nash driving.

- thankyou to Kevin Emmerson for telling this story.
This car first appeared in the 1959/60 season at Tracey's Speedway, as the Len Fleming Holden powered #55, driven by Bill Humphries to many victories. In February 1961, Bill was fourth to American Ace Bill Tattersall, South Australian Star Bruce Rickard, and top duel Victorian Champ, Jack O'Dea in the Victorian Championship. January 1962, Humphries was runner up to Victorian Top-Liner Ken Parfrey in the 30 lap "Alf Beasley Memorial" at Tracey's Speedway, and in March that year won the 50 lap Grand Prix.January 11th, 1964, Humphries was third in the "Alf Beasley Memorial", and on March 14th, took out the 25 lap Australian Derby also at Tracey's. This was the last season at Tracey's, the Speedway was sadly closed down in April of 1964.Humphries left his hometown of Melbourne to try his luck in the US, winning a couple of regional titles, among other successes. He returned home on one occasion with his US Offy Midget in 1968, and won the "Alf Beasley Memorial" at Brooklyn Speedway.Meanwhile, Fleming sold the #55 car to his employee, mechanic Des Nash. The car became the Hearnes Hobbies Holden Midget. Des graduated from the TQ ranks to become "Rookie of the Year" for the 1966/67 season. Des defeated South Australian vetran Len Golding in the final of the Victorian Match Race Championship in the same year.Next season 2 nasty smashes put Des and the #55 car out of action for 14 weeks, the first iat Albury, and the second at Rowley Park, which all but destroyed the #55 car. Des bounced back winning the 30 lap Victorian Grand Prix at Redline on April 6th, 1969, ahead of South Australian visitors Phil O'Shea, Bill Curnow and Len Golding. In May 1969, the No. 55 car became the first Midget in Australia to be fitted with the new "roll cage" innovention attached to the normal open cockpit. However, since roll cages were not passed for competition in Australia at the time, both Des's #55 and Rex McKay's #10, which also had the roll cage fitted, were officially banned. Common sense prevailed for the 1970/71 season however, and the roll cage was allowed as an option. The roll cage in Midget class became mandatory for the 1971/72 season.Season 1969/70, Des won the Club Points Score in the #55 car to clinch the Redline Track Championship, and was also Victoria's top pointscorer to Qualify for the final of the National Championship at the Sydney Showgrounds. But the highlight for Des was posting the fastest time trial at the Brisbane Exhibition Speedway for the "little Indy" 100 lapper, out of the 17 cars that managed to do their qualifier before rain postponed the meeting.For Season 1970/71, Nash replaced the Holden engine with a new Chevy, and on December 27th won the Victorian Championship at Redline Speedway. In October 1971, Des built a brand new Midget with a space frame chassis, and installed the Chevy motor from #55. The No.55 car was then sold to Johnny Rosewarne who, with Barry Power and Rex McKay replaced the raceworn original chassis with a newly constructed chassis, and refitted the Holden engine and running gear. The No.55 car was back in business, but had now become the Victorian 26 car.Rosewarne drove the car for about 2 seasons before being forced to retirt from the sport. Barry Power then drove the car a few times before the car was again sold and only raced occasionally. Wayne Pearce then bought the car and painstakingly restored the car back to its original appearance as the well known "Des Nash Hearnes Hobbies" Holden #55 Vintage Midget.The #55 car is now owned by Robert and Denise Haselgrove, and demonstrated by Robert, who always has the car in immaculate condition.